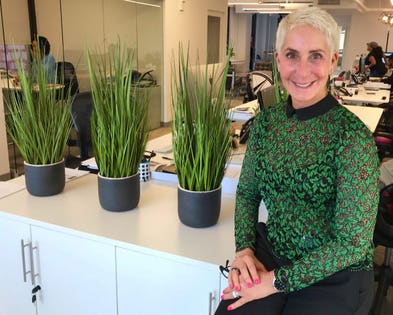 Robyn Streisand, founder and CEO of The Mixx and Titanium Worldwide

Want a more resilient vibrant economy? Diversity is key to achieving this goal. It helps companies earn more and employ more while increasing profits and innovation. It’s not just about attracting a mix of employees. It’s about penetrating untapped markets. It also means access to diverse suppliers who are agile, cost-effective, and provide innovations to meet the needs of corporations better and to serve their customers better.

The diversity conversation has risen slowly and steadily and, during the past five to eight years, has become one of the top five strategic imperatives for every CEO running a large corporation, according to Robyn Streisand, founder and CEO of The Mixx and Titanium Worldwide.

In 1996, when the fintech company she had worked at for 10 years moved to Long Island City from Manhattan, Streisand took the move as an opportunity to start her own graphic design firm. Streisand wanted the name of her company to reflect her values. As a child, she made yummy chocolate chip cookies with her mother. The reason the cookies tasted so good, her mother said, was that “it’s all in the mix.” The word was a perfect reflection of her passion and the legacy she wanted to leave. However, when she went to register the name, it was taken.

Was this a sign that Streisand shouldn’t move forward? A friend pointed out that Streisand was also about love and community. Reflecting the word “kiss,” she added a second x to The Mixx and expanded the meaning of the company.

During her 10-year corporate career, Streisand had grown an extensive Rolodex of colleagues who had moved to other companies, including outside the financial services industry. These people knew the caliber of Streisand’s work and trusted that she would deliver creativity that was grounded in the strategy and met the objectives of the campaign. Her clients now include Mercedes-Benz USA and other Fortune 100 firms.

Over the first few years, the company quickly evolved from a graphic design studio to a creative services agency. However, making the transition from print to digital was painful. “None of my creatives knew anything about digital,” said Streisand. Some embraced the change, while others did not. “We overcame the challenge by changing some of the team and bringing in resources that were digital savvy.”

“This was an ‘aha’ moment for me,” said Streisand. Since then, she’s become a huge proponent of certification. She’s also taken the time to learn how to leverage her certification. “It was like going back to school,” she said. But it was worth the time. “I got opportunities that I might not have ever gotten before … It’s become a key differentiator for my company.”

For example, The Mixx is working with a big four consultancy’s chief procurement officer, on a communication framework so that everyone — from partner to someone on his staff — speaks with a consistent voice about supplier diversity, both internally and to the outside world.

The Mixx has also developed a pilot program that enables companies to test the validity of strategy and tactics by starting small, without committing millions. Companies like Mercedes Benz have had enormous success with this approach.

In addition to the value-added that certification has provided, Streisand recognized that she had another advantage. As a boutique agency, her company was getting accolades from clients for the higher quality work it did compared to conglomerate agencies. She started receiving requests for proposals (RFPs) for much larger-scale projects. However, “because of our size [20 employees], we were not being asked to go to the next level,” she said.

Streisand asked herself the question that changed everything: What if I could offer anything that a large company can by organizing a best-in-class network of diverse, independent agencies with expertise across multi-disciplinary fields, using one point of contact? She had a rigorous selection and vetting process to ensure quality and cultural fit. Importantly, the agencies had to work collaboratively and not competitively. Titanium Worldwide was born five years ago to compete more efficiently and effectively for large-scale opportunities against major agencies and holding companies.

While it does not have a global presence yet, Titanium Worldwide is signing business and has attracted very senior procurement executives to its advisory board. They understand the unique value Titanium brings — the belief that to attract new audiences, the brand has to connect to the market authentically.

Finding imagery for campaigns targeting new markets is challenging. Most stock image houses don’t get the need. One does. “Very few providers have the asset library Adobe has,” said Streisand. “They see how ripe this opportunity is.” Importantly, when Streisand’s team identifies gaps, Adobe works to fill it.