Is Your Management Weasel-Speak Killing Your Team? 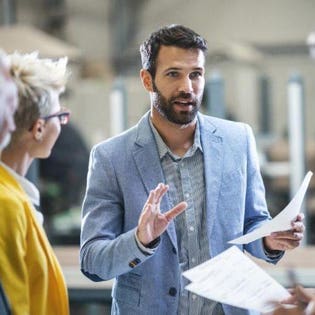 I read an article last week by a noted management consultant revealing that “working harder, not smarter” contributed to burnout and lost productivity.

Could we chat about this? Did it really take a management consultant to figure this out, and doesn’t the whole concept of “working harder, not smarter” assume that there is an entire class of employees whose strategy is to work in just the opposite mode? Would that be following the less-popular strategy of “working unfocused, and stupidly”?

A colleague and friend at a large manufacturing company, a senior level manager, suggested a term that fits for this kind of silly language: “management weasel-speak.” The phrase “working smarter, not harder” represents a terrific example of a cliché that really makes little or no sense, and I asked her what other examples she hears from higher-ups in management:

“We’re having an optimization meeting to discuss improved efficiencies.”

Translation: “There’s a reduction in force coming, but we cannot tell you that.”

Translation: “We most likely will go with the same tired strategies next year.”

Translation: “Most of our current team members do not play well together.”

“We’re going to need to more with less!”

Translation: “No raises or additional talent are coming anytime soon.”

“Let’s take it to the next level!”

Translation: “You are really doing pretty low-quality work for what we’re paying you.”

I can only compare these clichés and trite phrases to those you hear on dating sites. I paid for a dating site a few years back, and it worked great. I quickly met my wife, and we have been happily married for two years. However, I remember some of the profiles on the site would say things like, “I have so much love to give, and I’m just looking to find that special someone to share it with.” Is it just me, or does that really mean the following: “I will suck the life out of any living organism”?

Management weasel-speak does almost the same thing. It dulls or completely kills positive energy — a form of brain damage to you and your team.

The Toll That Weasel-Speak Has on Humans

When senior-level managers, CEOs and team leaders engage in management weasel-speak, there is a toll to be paid. In simple terms, unclear directives or encouragement dull performance, by the simple effect that the language has on those who hear it. How would you respond when you know the leaders are obviously speaking about a reduction in force but concealing it in terms like “optimization meeting to discuss improved efficiencies”? Trust gets eroded, and the hidden effect becomes a general lack of listening from team members — low-level brain damage, if you will.

Remember when you were a kid and your mom would hound you over and over about getting your homework done, or picking up your room or clearing your toys from the family room? The first call was heard. The second was mildly annoying, and then the third and fourth actually caused pushback and resentment on your part. Even if you did not take decisive action, you heard the repeated and escalated hounding.

Why the resentment? Two simple reasons. First of all, when pushed, humans naturally tend to push back, or, if panicked, run away. Secondly, your brain literally stops hearing the repeated language, either due to apathy or lack of clarity. Had your mom changed up the message, or had she been much clearer, chances are you would have responded differently (and without resentment). Perhaps you might have even done your homework on your own.

Well, your team at work is not much different. When you throw management weasel-speak at them, rather than speak in clear, specific requests, they tend to zone out. What exactly does “having an optimization meeting to discuss improved efficiencies” mean to you? Although I can understand the literal meaning, the sum of the parts turns this sentence into gibberish of sorts, causing, well, mild brain damage. I simply come to the meeting, knowing generally that we will discuss budgets or money, or “efficiency,” but suspect the ruse really conceals a pending reduction in force. Reductions in force are not allowed to be discussed far in advance, because they cause way too much fear and dysfunction, so the manager weasels obfuscate the real purpose of the discussion in seemingly intelligent but really incomprehensible language.

I make sure that my phone has plenty of fun games for these types of meetings. How about you?

The Truth About The Humans On Your Team

The truth is that every member of your team can deal reasonably well with almost any challenge you throw their way. The use of management weasel-speak equals the same avoidance and distrust that your 15-year-old has for you, surrounding the conversation around their sex life. They simply avoid it or speak in vague language to sidestep the subject.

What might happen if you asked for assistance in solving a huge challenge facing the team? Might it be that they already know or sense what is going on? Sure they do! When you discuss openly and together a topic as serious as severe budget cuts, for example, these struggles can be dealt with in a much better way than avoiding the issue.

Management weasel-speak is curable. It does not have to cause brain damage in the form of distrust and lost productivity. When you, as a leader, communicate in clear, simple requests, the improvements come quite quickly.