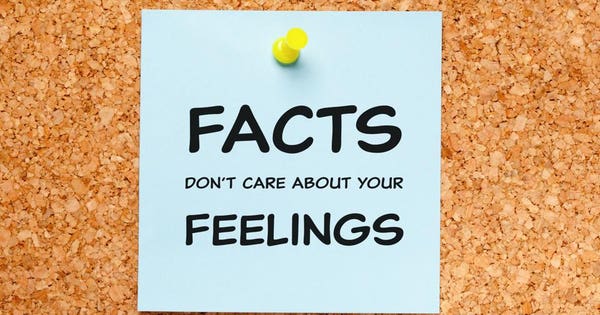 Use logic instead of emotions to analyze arguments in order to avoid belief bias.

Belief bias is one of the most common forms of cognitive bias.  It has probably altered your acceptance of arguments more than you would like to admit.  Belief bias is a type of cognitive bias wherein we are more likely to accept the outcome of something if it matches our belief system.  You may be thinking, well, that’s self-explanatory. Not so fast.  Belief bias also states that if a person produces an argument that we cannot follow, or that makes no logical sense to us, we are still more likely to accept it because the final premise matches what we also believe — it “makes sense.”  In other words, you are likely to accept a conclusion as true because it is believable to you, rather than examining whether the conclusion is logically valid.  Here are two syllogisms, or logical arguments that require deductive reasoning.  The conclusion (final statement) is inferred from a major premise (the first part of the argument), and a minor premise (the second part of the argument).  First, all trees have leaves; crepe myrtles have leaves; therefore, crepe myrtles are trees.  Second, all birds can fly; a pelican is a bird; therefore, a pelican can fly.  You are more likely to rely on your prior knowledge base and personal beliefs to accept both conclusions when only the second syllogism is logically valid.

When belief bias comes into play, you are basing your reasoning not on the strength of someone’s argument, but on the believability of his or her conclusion.

Let’s look at how belief bias alters our perceptions of arguments.  We have a set of core beliefs that we obtain from how we were raised, our life experiences, culture, religion, profession, our peer group, our families…the list of influences over our beliefs goes on and on.  Let’s say one of your core beliefs is that ingesting chocolate chip cookies is the way to world peace.  You just know this — it is deep in your being.  You go to a rally that is pro-cookie.  Mr. C. Monster (who you know as an expert in cookie-related matters, which can lead to another form of cognitive bias) says that cookies contain magical healing properties.  He says we should force-feed cookies even if people don’t want them because cookies lead to world peace.  You are all for cookies leading to world peace, so you are on board.  But wait, how do you feel about force-feeding cookies?  In an extreme form of belief bias, you ignore the concept of free will, and you focus on the conclusion.

When people tell us the reason we don’t understand their argument is that we are not “smart enough” or “educated enough” is very effective, especially when we are told this from people in positions of power.  We do agree with their conclusion, so we assume maybe he or she is right — we just aren’t as educated or smart to understand how the person got to that conclusion.  And they are in a position of power, so they are trustworthy, right? And we like the conclusion, so that works for us.  We don’t question the person’s motives or flawed logic.

How is this used in advertising and marketing?  As long as the conclusion is what someone wants to hear, they will usually write off the details of how someone got there.  That conclusion matches what the buyer wants.  A seller will avoid using logic in a sales pitch and instead focus solely on the outcome he or she can provide.  The seller will also focus on how well that outcome matches what a buyer wants, and their inherent belief system.

One way in which belief bias overrides logic is when you require people to answer a question in a limited amount of time.  Slower processing time is more likely to yield logical, rather than belief-based outcomes.  So when a salesperson asks you rapid-fire questions, look out for belief bias.  You are more likely to have a good defense to the influence of belief bias when you are able to create alternative premises to a conclusion.  And that takes time.

How does one counter belief bias?  Put your logic “cap” on when presented with an argument, and take emotion out of it as much as possible.  Think beyond your gut reaction that what someone says “makes sense” — consider, using logic, whether what he or she said leading up to that conclusion is true or possible.  If you are given a high-pressure sales tactic, walk away.  Think about if what you are being told about the item really meets the criteria of what you want.  This is why it is always helpful to write down the top five or ten features you want in an appliance/house/car before you buy it.  Turn off your emotions and zoom in on logic.  Do the premises leading to the conclusion also match your belief system?