Channeling Innovation: How Does It Happen? 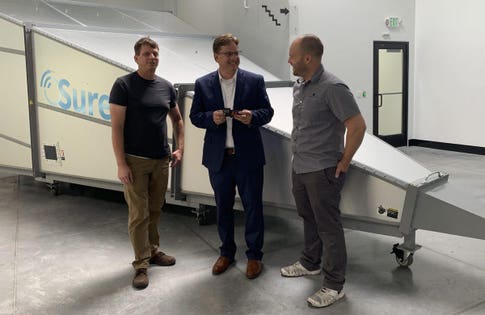 Many of the entrepreneurs I know have preconceived ideas about how innovation happens and how a business begins. They have visions of pondering, reading books from the biggest authorities and dreaming about glimmering exits until the great white moment of inspiration begins.

When the company launches, they anticipate an unwavering path to their destination. As circumstances differ from expectations, a typical founder will either stay the course to the bitter death, or potentially shrug and pivot freely, believing the shifts will happen with ease.

The reality, however, is much different.

This week I spoke with Mark Hall, founder and CEO of Sure-Fi, an IoT technology that transmits low-data communications through impenetrable obstacles and over long distance. His company is one of some 20-plus in the Provo, Utah Opportunity Zone in the three-generation family office and innovation hub Hall Labs, founded by David Hall, whom I am consulting.

My questions for Mark were the obvious ones: “How and why did you start a business based on ‘superpower’ radio signals? What made you think of such a thing, and what compelled you to build a company around it?”

Mark was surprisingly forthcoming with answers that should interest every entrepreneur.

So, minus the studies of Peter Drucker or a revelation of glory, what spurred the idea that allowed Sure-Fi to begin?

“I come from a family of innovators, but in honesty, I was just looking at ways to use technology to improve the life of my family,” he says.

In 2010, as the Internet of Things (IoT) and wireless apps were beginning, Mark was thinking of ways to address the challenges he and his wife faced as the parents of five children, including two boys with autism (one severely disabled to the degree he now requires private care). At the time, it was extremely difficult for his wife to leave the home for even the smallest errands such as shopping for groceries.

As Mark describes the challenges, he and other families face he noted that for some, the solution is “back stocking”—utilizing large amounts of kitchen and pantry space to stock high inventory levels of food and consumables, paper goods and supplies.

Another was the early advent of grocery deliveries. Amazon had started the idea to a degree, but services were beginning in isolated locations such as Seattle and LA. The Ubers and Door Dashes of the world did not yet exist.

So what was the next best option? Mark thought about ample cabinetry filled with family staples and a full fridge and a freezer. He developed a product he called the “Hidden Butler,” to be kept in the garage for storing goods at appropriate temperatures. A delivery person would come and refill it.

Then he hired someone to stock the Hidden Butler with everything a family would need for the week. Mark’s wife would receive the list on an app and could alter it or let it automatically repeat. In its first year, 18 families signed up. They loved it at first, but ultimately it cost too much to sustain. “People are picky when it comes to groceries,” he said.

The problem he was never able to solve was the need for a garage keypad people could program remotely with specific PIN numbers to allow the delivery person to get in.

The capability didn’t exist for a good reason, he notes. It was really tough to get reliable wifi inside a garage from the wireless router, and even tougher to get it to the other side of the garage door outside. Within the company Mark directed as General Manager, Novatek (a manufacturer of synthetic diamonds), he set out to discover an answer, using a set of engineers within the company of 250-300 who were advanced RF experts (due to Novatek’s work on tough transmission issues with the Intelliserv communications network).

The phenomenon the team used to surmount the difficulties of reliable wifi boiled down to a surprising discovery. They studied the concept of “Chirp”—the interpretation of sound frequencies whales and dolphins have been using for centuries to communicate over great distances and through oceans.

Chirps are an efficient way to send low amounts of data fast, over vast spaces and even through obstacles. The SemTech transceivers make it possible to process that data quickly. The team used the maximum power allowed by the FCC, then added proprietary modulation to create “the best 900MHz radio available.” “It’s 10x what your baby monitor would do,” he says.

For example, many people were attempting to build long-range wireless technology for gates, but rain, snowstorms, or something as simple as a moving truck driving by created radiofrequency interference that made these technologies unreliable. The team persevered. The result was Sure-Fi.

“We developed proprietary modulation to get 100% reliability in even the most extreme situations from the router to peripheral devices outside the home,” Mark says. “People were really amazed when we developed the ability to support controllers on gates, effectively eliminating the hassle and expense of trenching.”

The team has mastered range and reliability and is now putting the same amount of effort into impenetrable security as well. The solution is ideal for low data applications—not video, but a signal that can turn on a light or send audio or a credential or a real-time report.

Now for the inception of the company. As the GM of Novatek, Mark had been working for a year on the sale of Novatek to Schlumberger. On September 15, 2015, the acquisition came through.

“We had sold to an oil and gas company that had no need or interest in our RF technology,” Mark says. “So, without my staff’s knowledge, I created a separate company to create a garage/gate control product.”

The golden inspiration that inspired Sure-fi, then, was not the classic study of a market so much as a way for Mark to create a new company that would ensure his own future and the future of his engineering team when the acquisition of Novatek came through. By the time the deal was closed, everybody was on board and Sure-fi was born.

His strategy: “I just call it swimming,” he says. (Apropos, perhaps, given the technology of Chirping that has been such a key to the company’s strength. He was also helped by the fail fast/willingness to pivot environment that is central to the Hall Labs environment he was working within.

“I don’t read all the books,” Mark says. “I call my approach ‘always trying to improve things.’ You just get out and do it, as opposed to sitting and pondering. In my observation, most great things happen when you’re going in a direction and in the process of solving a problem you run into something with a greater value proposition than the idea you started with.”

He pauses. “It’s the opposite of focus,” he says.

My own observation is that his strategy involves the courage and willingness to pivot quickly as well. When you see a better path and a reason to pivot, a great entrepreneur must set ego aside and marshal the fearlessness to move their focus quickly to accomplish new goals.

“The SemTech chip Sure-Fi uses was not even available when I began my idea,” Mark says. “We had experience in basic radio frequency work that was our own. But the ability to create bridges between wired and unwired technology—it was bringing the two technologies together that made it possible to create a platform any provider can use for low-data applications that are “powered by Sure-fi.”

The company’s products are now certified and selling in the U.S., Canada and Latin America and are close to certification in China. In all, it’s a fascinating example of the varied ways a winning idea begins. In many cases, it’s better to forget the business school template, find a problem to solve and dig in.