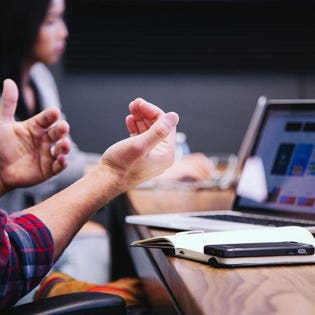 Most new startups fail in the early stages before they even get the chance to grow. Here are four proven ways to stay focused on hitting your growth goals and making it to become a thriving business.

Is your startup going to survive—let alone thrive?

Getting a startup off the ground is difficult. Many new companies fail in the very early stages before they even get the chance to grow. Roughly 472 million entrepreneurs around the world try to start a business each year. But the number of businesses in the world stays pretty constant, meaning that about the same number of businesses are closed each year as are opened—keeping entrepreneurship at a sort of equilibrium.

When it comes to growing your startup to the next level and becoming a true small to mid-size business, a recent podcast guest and founder of GMass, Ajay Goel, has learned a thing or two over his years as a serial entrepreneur. Fellow guest and entrepreneur Ashley Leonard, CEO of Cloud Management Suite, is in the same camp. He’s also built multiple companies from the ground up, and if anyone knows how to push beyond the startup challenges, it’s these two.

Combining their experience with those of a few others I’ve spoken with, here are four things you need to keep top of your mind when you’re growing your startup.

Goel has grown several businesses largely by himself or with very little outside help, and one of the biggest things that helped him along the way, was creating solutions to real problems he was having himself.

“There’s a lot of books and papers you can read that talk about solving the market and knowing your customers. That’s all great and valuable advice to follow,” he said. “If you can figure out a problem you have that no one else has built a solution for yet, there’s a very good chance that other people are having the same problem that you can solve now too.”

If you’re personally invested and the product’s something that’s useful to your own needs, you’re going to create a better product.

Silicon Valley is no stranger to this line of thinking. The term “dogfooding” is synonymous with actively using and testing your own tools to better understand them and work out the kinks for future users to later benefit from. If you want to graduate from a small startup into a thriving business, you’re going to have to do the same.

When I asked Leonard about his advice for growing a startup, he mentioned the importance of establishing a clear value proposition. “With my current company, we’ve really emphasized the convenience and security aspect of what we do,” he said.

Leonard continues, “So many companies want safety and security and automatic updating, but they don’t want to pay or train the staff for it. When we come in and say we can do it for them, it takes care of a lot of issues in one fell swoop. Whatever your value proposition is, it’s got to match what people need the most—not just what they’d like.”

Goel made a similar point.

“Friends and colleagues would often ask me to look over an important email before they sent it,” he noted during our interview. “That’s the product that became Wordzen. I kind of wrongly assumed that the rest of the world also cared about grammar and punctuation in emails. It turned out that most people don’t care about whether their emails have perfect English or not. But what I did find, is that people care about saving time responding to their emails.”

Given the feedback he got, Goel changed the value proposition from high quality emails—to saving his customers precious time. That’s when things really clicked.

Whatever audience you’re trying to reach, make sure that you’re articulating a clear value proposition and using storytelling they can relate with in order to drive that point home.

Moreover, don’t be afraid to change when things aren’t working as well as they used to. How many people today remember that Amazon started as a bookseller? Some startups change radically over the course of their lives.

3. Opportunity Only Knocks Once

The great William Shakespeare wrote of opportunity, “There is a tide in the affairs of men, which, taken at the flood, leads on to fortune.” He’s right. Throughout history, there have been people who were prepared for the opportunity that arose, then grabbed hold of it with both hands.

If you want to make it from a startup to a thriving mid-size business, you have to stay prepared for seizing the right opportunities. Goel noticed this with his latest venture, GMass. He was looking for a way to send mass emails through Gmail and realized that there was nothing on the market that allowed people to easily do that.

As luck would have it, Google had literally just released an API that would allow someone to build it, so Goel jumped on the opportunity—and the rest is history. GMass is now a $90,000+ per month SaaS business.

Be prepared for your opportunity when it comes. Several years ago, there might not have been a market for Ashley Leonard’s business either, but these days, he’s able to help a lot of companies with his product. “We couldn’t have built the business this way even three or four years ago,” Leonard shared. “If you want to succeed, you have to grab the opportunity as soon as it’s available. If you’re one of the first through the door to a new product segment, you’ve already got a leg up.”

4. Stay On Top Of Security

In 2018, more than 446 million records were exposed in over 1,200 data breaches. Data breaches, ransomware attacks, and all of the other pitfalls of a modern information-based society will hurt any company transitioning from startup to SMB.

“It’s easy to get caught up in the day-to-day running of the business and ignore the less exciting parts of the infrastructure,” Leonard observed. “Many companies try to grow too fast and they don’t put the effort they need into the data security and safety. Each company that tries to piecemeal a solution tends to lose out on reaching that next level. Think of it like buying the supplies you need for your business.”

There are obviously far more areas than just these four that will impact your startup’s journey.

If you’re having trouble making that leap, be sure you’re getting these fundamental steps right, and you’ll be well on your way to a brighter future.